Carruthers Renewables, a small Perth based engineering company, collaborated with the University of Strathclyde's Advanced Forming Research Centre (AFRC) – a specialist technology centre within the National Manufacturing Institute Scotland (NMIS) - to identify the most effective manufacturing methods for a new waterwheel that can operate in small bodies of water previously considered unsuitable for renewable energy solutions.

Millions of sites worldwide have a river or waterfall with less than five metres drop, especially across Sub-Saharan Africa and South-East Asia. Here less than 10% of the population have access to electricity.

Carruthers Renewables designed the first patented waterwheel in 138 years, which uses specially designed blades to operate with high efficiency at a range of water speeds and flows.

It required support taking the next steps towards commercialisation including selecting the most effective manufacturing route, securing additional funding, and developing a prototype for further testing.

How did NMIS help?

As part of a feasibility study funded by Innovate UK, the Engineering and Physical Sciences Research Council (EPSRC) and the Department for International Development (DFID), NMIS developed a computer model to help determine the effect of changes in the design, such as the number of blades in the Carruthers Wheel, on potential energy output. 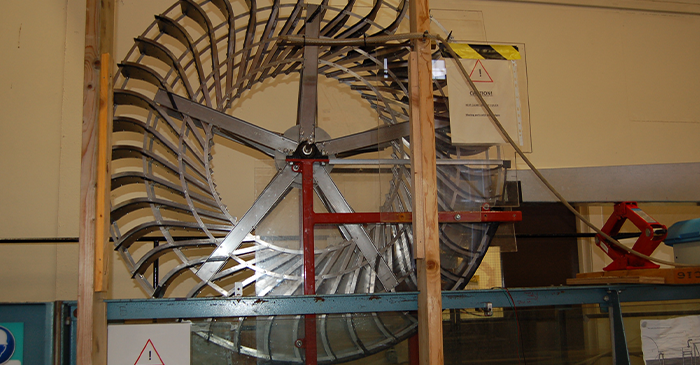 The support we have received from NMIS so far has been incredible. We have been working together to secure the best manufacturing route, allowing easy install and maintenance of the Carruthers Wheel and the ability to withstand harsh environments. Above all, the goal is to make a wheel that will provide electricity to people who are currently living with no access to the grid and the progress made so far has been ground-breaking.

The computer design and modelling work has provided essential technical information for the next phase of the development of the Carruthers Wheel, which will see the build of a full-size demonstrator based on the manufacturing knowledge from the feasibility study.

This will allow Carruthers to test materials, manufacturing, assembly, and operation in a more realistic environment, bringing the final product closer to fruition.

Support from NMIS has allowed the company to strengthen the business plan and to secure backing for future projects from the Crown Estate, Scottish Water, the Scottish Environmental Protection Agency, Michelin Scotland Innovation Park (MSIP) and many other stakeholders.

The funding from the project has also facilitated Carruthers employing a new part-time staff member.